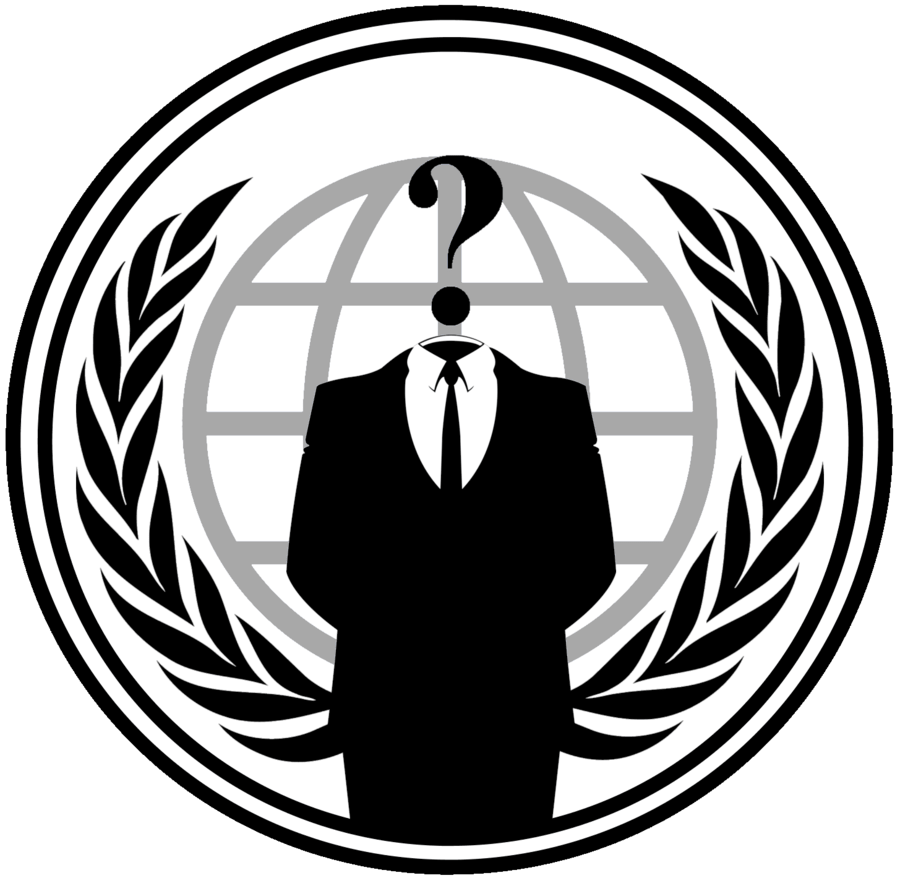 Real life hacking group, started on 4/chan then grew to a massive size, been fairly quiet lately... probably laying low from the feds.
what dead sec and Fsociety are inspired by, they create videos with masked people, do hacks against major corps and aid whistleblowers in fighting corruption... Usually "for the lulz"

Initially a group of internet trolls forged by the fires of 4 chan and encyclopedia dramatica they eventually were united together working like a lolgun to bring darkness to light.
Primarily they do things randomly and while they've had a large effect operations usually do not remain for the long haul due to the nature of Anonymous being that random people join annonymously.
while not always successful they remain in the public mind as a powerful and influential hacking group

Well Known by their "battle Cry":"We are Anonymous We are Legion We do not forgive, we do not forget, Expect us"

Major hacks:
Project Chanology(2008)
also known as Anonymous vs Scientology this effort was their plan to bring to light the corrupt for profit church of scientology, the effort was global and it brought a lot to light and helped to discredit this greedy empire.
Also the first recorded use of the guy fawks mask

Operation Payback(2010)
Having become aware of film studios working with over seas operations to DDoS Popular Illegal Media hosts a large number of Anonymous members started Operation Payback to return the favor.
Primarily using their own DDoS tool called the Low Orbit Ion Cannon or LOIC they targeted the over seas firms, various media corporations, the motion picture association (MPAA) and the Recording Industry Association(RIAA).
they openly stated during this event: "Anonymous is tired of corporate interests controlling the internet and silencing the people’s rights to spread information, but more importantly, the right to SHARE with one another. The RIAA and the MPAA feign to aid the artists and their cause; yet they do no such thing. In their eyes is not hope, only dollar signs. Anonymous will not stand this any longer."
This Rapidly became one of their largest operations and due to the efforts of companies to put a stop to them they were forced to create AnonOps in an effor to maintain communication post corp/gov silencing.
During all this Wiki leaks released a large number of incriminating documents after the US Government threatened the site with legal action.
This event fundamentally changed Op Payback from Anon vs Copyright to include social justice for one of the leaders of wiki leaks julian assange as Op Avenge Assange.
Using the LOIC Anonymous brought down several banking websites as well as Every DNS which hosted wiki leaks and the website of US Senator: Joe Leiberman who who supported the push to shutdown wiki leaks.

In December the LOIC became ineffective against paypal and other financial services and so Anonymous began using botnets utilizing the power of the Zombie computers contained within to strike a far more powerful blow.
Unfortunately shortly therafter the hackers controlling the botnets began arguing amongst themselves and ended up dropping the Support of Anonymous.
Later on Pay pal would give the FBI the IP addresses of thousands of it's attackers leading to the arrest of 14 members.

(2011-2012)
in the wake of their hacktivist activities the previous year Anonymous would work to fight against injustice on a global scale with everything from Operation Tunisia to help with the Arab Spring to taking on computer security firms in an effort to protect themselves against their enemies.
also during 2011 they assisted with and were a major part of Occupy Wallstreet
They've taken on groups who are guilty of Homophobia, Racism, sexism, Child Pornography and various other isms that they deemed fit.

(2013 - Present)
Anonymous continues to strike out against injustice however their activities have reduced in recent years, still they continue to fight "for the lulz".